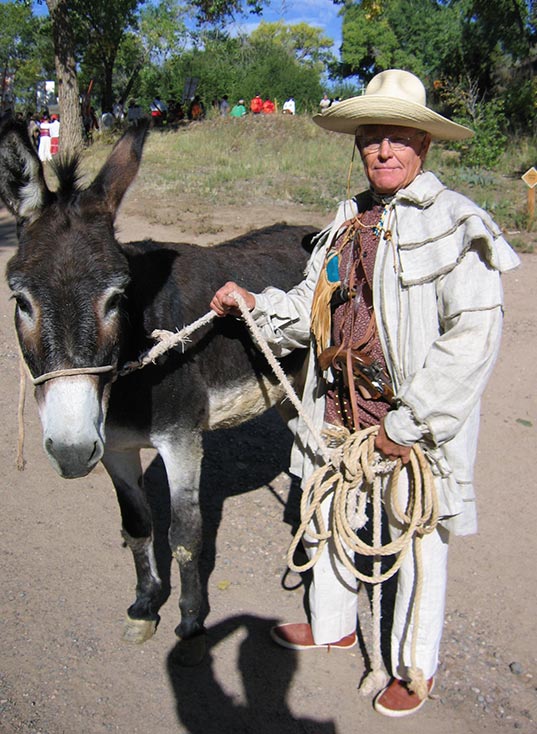 taxonomically, Equus asinus; a burro is a smaller (usually) equine of African ancestry (probable descent from the Nubian wild ass) which has been an invaluable draft animal in the American Southwest, most notably as a cargo carrier but also for riding; also important as breeding stock for mules (see below)

the English word for a burro; a donkey and a burro are the same animal 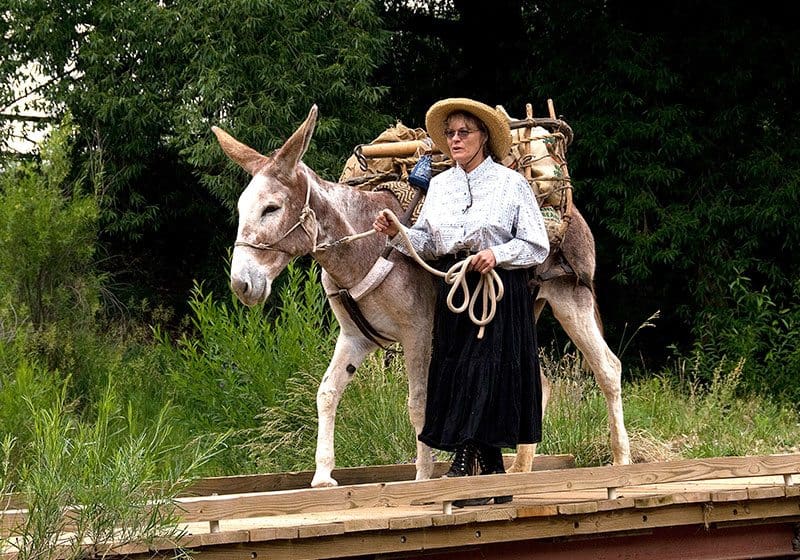 a male burro or mule

a female burro or mule

Spanish term for a riding saddle

Spanish term for a packsaddle

a type of packsaddle, the ancestral use of which goes back hundreds of years in both the Old and New Worlds; packing is accomplished by use of top-of-the-saddle crosspieces from which cargo panniers or other loads (as firewood) can be hung; during the Spanish Colonial and Mexican periods of New Mexico history, this type of saddle was probably more often utilized by Anglos (as prospectors and Santa Fe Trail traders) as opposed to the aparejo system (described below)

a packing system, reported by some sources a being essentially Spanish Colonial and Mexican in origin; as opposed to a true saddle, inter-connected grass-or straw-stuffed leather or fabric cushions are hung, one cushion on either side of a mule or burro and lashed on with a cinch strap; various contrivances on the aparejo can then be used to hang cargo with a final rope lashing to keep the entire load in place while traveling

the Spanish term for a muleteer or burro drover; from “arre”, of Arabic origin; “¡Arre!” was a shouted exclamation (similar perhaps to “¡Vaya!”) conveying an arriero’s readiness to depart with the pack train; arrieros were known as an occupational group proud of their abilities to quickly and completely load a mule or burro (within 3–5 minutes!), handle a pack train during trail travel, and a reputation for honesty (important as regards the transport of such noteworthy commodities as valuable metal ores and expensive personal possessions)1

The first lines of a traditional song of the arrieros which, in a noteworthy Marc Simmons book chapter, continues as: “Arrieros somos y algún día en el camino nos encontramos” (“Mule drovers are we and some day on the trail we shall meet”)4; a current rendition of this song can be enjoyed on some YouTube videos, notably by recording artist Cuco Sanchez.