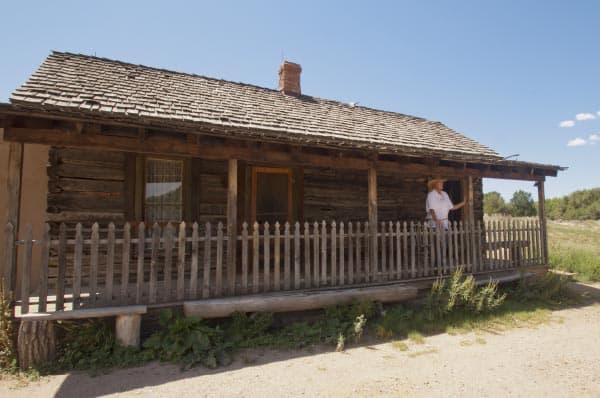 This interpretation will concentrate upon the development of education in New Mexico from the 18th century through the late 19th century. Education was vital to New Mexico and there was a constant need for educators, Formal education at missions for Native populations.

These systems of mission, formal and informal education carried on through the Mexican period and into the American Territorial period. The English language as a subject was being taught by the late 1800s, but Spanish continued to be the primary language of instruction in Hispanic schools into the early 1900s. Overall, formal education for women was limited and the primary focus was upon the training of men.

Priests conducted instruction for Pueblo natives as a means of conversion. The pedagogy was reading, music, tradecrafts, Latin and Christian doctrine. Mission schools existed throughout the colonial period virtually uninterrupted.

Formal education in a traditional school setting was hard to come by before the 1800s. Pedagogy was reading, writing, arithmetic and morals. It appears that reading was taught before writing, meaning that the ability to sign ones name MIGHT imply full literacy in colonial New Mexico.

Informal education occurred throughout the colonial period and depended on the education level of ones parents and family. Some documents of the time indicate that those with means were paying others to educate their children. These documents also show that people with books were loaning them to fellow colonists. We can only assume that some of this loaned material was being used to teach others to read. As can be expected, adults were responsible for providing religious instruction for their children and training in the customs and ways of participating in society.

It is important to point out that there were other forms of education and many ways in which education played out in New Mexico from the Spanish Colonial until American Territorial periods. There was vocational training, such as learning how to become a blacksmith, training requiring previous education in reading as well as basic arithmetic. There were also opportunities to pursue higher education outside of New Mexico in other parts of New Spain. Later, young men were sent to the Midwest and Eastern United States, especially to develop English skills, essential for trade and governance.

This log schoolhouse was built as a home in 1878 and was brought to Las Golondrinas from Ratón, New Mexico. This small two-room cabin was converted into a private schoolhouse in the early 1880s becoming one of the first in Ratón and operated for only a few years before the Marcy-McCuistion Institute was begun in 1885. Lessons were conducted in English, probably for the children of the newly immigrated railroad workers.

While this building is originally from Ratón, it is interpreted as a typical New Mexican schoolhouse that could have existed in any Hispanic village. In a typical New Mexican schoolhouse, all ages were taught together in Spanish. Later, English was added to the curriculum of New Mexico’s schools and eventually became the primary language of instruction. Most of the students were males as were the maestros (teachers). The second room was lived in by the schoolmaster or later by the schoolmarm.

Of special interest to our interpretation of the schoolhouse is an official school administration document from 1885 that details a school in La Ciénega, believed to be in what is now the visitor’s parking lot of El Rancho de las Golondrinas. This school was characteristic of a majority of schools in New Mexico at the time. In 1885 the teacher (maestro) was Estevan Macías. There were 27 male students and 10 female students (escuelantes). The language of instruction was Spanish and focused on: lectura, gramática, ortografía, escritura, aritmética, moral, doctrina y geografía (reading, grammar, spelling, writing, arithmetic, morals, religious doctrine and geography). It appears that English was not taught at this school in 1885. 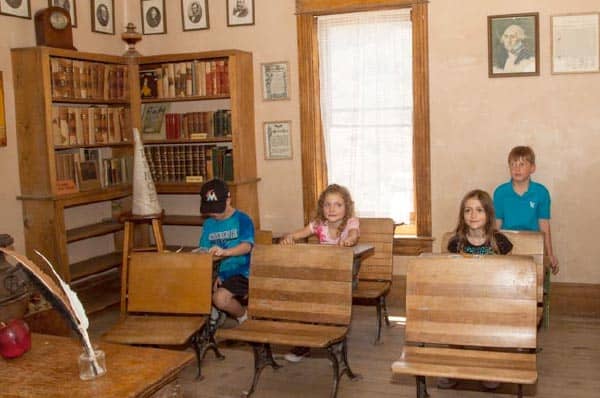 This room portrays a very well appointed classroom in late 19th century New Mexico. The children in this school have desks imported from the East by rail. At the back of the room, are an 1857 United States map and an 1879 New Mexico Territory map. Images of U.S. Presidents and the Territorial Governor line the wall, probably in an attempt to familiarize students with the United States and their place in the Union, all in preparation for statehood. A shelf with pegs by the front door holds lunch pails and coats. A potbelly stove stands at one side of the room for the winter months and a bookshelf in the corner holds books and primers, mostly in Spanish.

The children would have been taught in groups based on age. When not receiving direct instruction from the teacher, the students would be practicing their lessons. There is not much evidence that corporal punishment was common in Hispanic schools. In fact, there are specific cases in which charges were brought against teachers for harshly punishing students. Based on the records from the school in La Ciénega, the school day was from 8am until 4pm with a 2-hour break in the afternoon. The long break may have allowed some children to go home for lunch and briefly help with chores. If the children were granted a recess they may have played games such as Pitarrilla (New Mexico checkers), Chueco (New Mexico Hockey), Pipis y Gallos (Fighting Cocks), Meca Ceca (Here and There) or Cazoleja (The Sauce Pan/Tops). 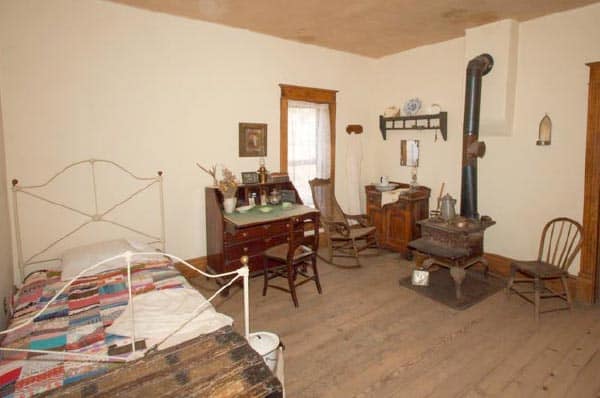 This room serves as living quarters for the teacher. It is gender neutral to accommodate the interpretation of a male or female teacher. Personal belongings include the traveling trunk, the nicho with Our Lady of Guadalupe, family photographs and religious images hanging around the room. Furnishings are sparse and were probably donated by the student’s families. A New Mexican made Empire-style daybed is in one corner with a washstand nearby. The table near the wood-burning cook stove serves as both desk and dining table. The crate under the table is filled with food brought by the students as partial payment for their education.