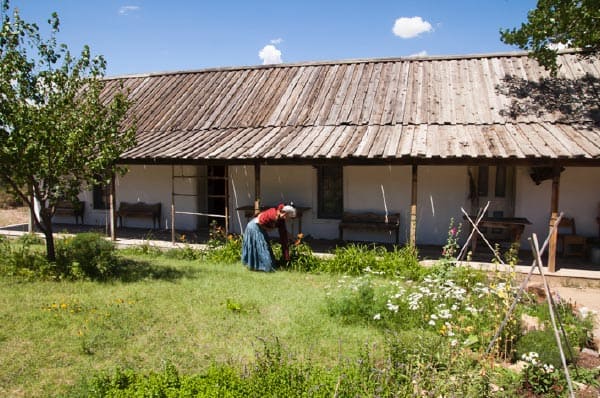 The Sierra (mountain) Village is comprised of buildings that are not original to the ranch and are arranged to show what life was like in the high sierras of Northern New Mexico. This particular group of homes and outbuildings depicts a family plot of land comprised of a young couple with children and their elderly parents.

By the 1800s New Mexicans began to populate the mountain areas as it became safer, after the Comanche treaty of 1786, to settle these lush and fertile regions. Many buildings used logs in their construction since wood was readily available in these areas. Roofs that were pitched in order to accommodate the heavy snowfalls of the mountain regions, sometimes replaced flat roofs common in the construction of adobe homes in the valleys. These peaked roofs also offered storage space in the attic. Many of the log structures at the ranch show the unique Hispanic method of corner timbers with double notch joints. This building type finds its antecedents in Mexico and made its way to the region in the late 18th and early 19th century.

Throughout the Sierra Village the dependence upon access to lumber in all forms is a major factor. The barn, corrals and small animal pens as well as two outstanding small log structures are a testament to the supply of wood in the mountains as well as the roof of the main house. Both the Casa de Abuelita and the Casita Primitiva were donated by the Sandovál and Barela families of Truchas and brought to the site in the 1970s. The log structures with stone foundations were both chinked and covered with mud plaster, as were the interiors. The relocation of the structures to the Sierra Village, along with the many other log buildings at Las Golondrinas was due to the foresight and perseverance of the museum’s founders. As a result, Las Golondrinas has the largest collection of Hispanic made log structures in the United States.

Inside all three of the dwelling structures, the emphasis is upon the life of an extended family in a mountain village after the advent of the railroad in the 1880s. The homes also show a progression of construction beginning with the Casita Primitiva, when the family first came to the high sierras, and ending with the Mora House as the family became more established. All of the living spaces show an eclectic mix of both purchased and handmade items as would have been typical of the times. With the coming of the railroad to New Mexico, large quantities of inexpensive goods became available, even in the little mountain towns dotting the Sangre de Cristo range. This influx of manufactured goods had a great influence on the long-standing culture of New Mexico and had a profound affect on the traditions of the region. 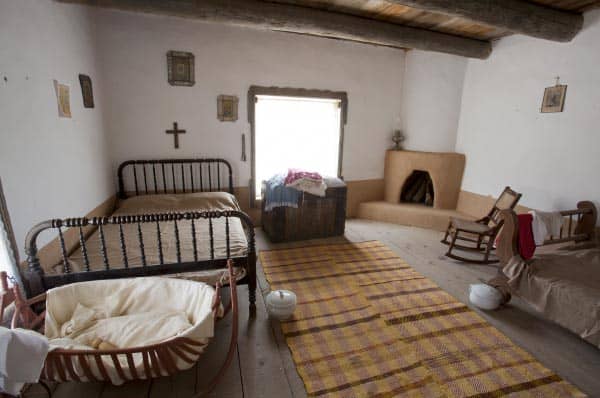 Mora is a town on the eastern slope of the Sangre de Cristo Mountains. This long house is typical of homes built after the arrival of the Americans. Its open style signaled the end of the period of raiding and warfare with native tribes so that homes could then be established in previously marginal areas. This structure is based upon homes in the Mora region and may contain some original woodwork but overall it is a re-creation, not a relocated structure. Its primary features include a long front portal and a wooden pitched roof as part of a laterally constructed adobe home.

The portal provided a shaded workspace as well as an area for resting and relaxing after a hard day’s work. The tall board and batten pitched roof was typical of mountain homes since it would shed the winter snows and provide an attic space for storage. This upper area created by the pitch was primarily used for the storage of food, particularly for the drying of foods rather than as living area. Ladders on the inside or an outside stairway were used to access the gable area. The simply constructed frame rests directly on the adobe parapet and the roofing is of wood. Outside there are two exterior doors, one into the entry way and another into the kitchen. This accommodated the coming and going associated with kitchen related domestic work (cooking, fetching firewood and water, collecting food from the root cellar, taking washed clothes out to dry) without having to walk back and forth through the house. Inside the kitchen is a wood burning cook stove and other tools that would have been the new appliances of the day. Along side this new equipment are traditional components of a New Mexican kitchen including domestic foodstuffs of corn, beans and squash, and greater quantities of industrial milled flour and new affordable luxuries brought over the rail or trail.

Inside, there is no central hallway so each of the rooms is accessed by traveling through one room after the other. The roof, doors, doorways and window frames are a testament to the easy access that the mountain villagers had to milled lumber. Homes in this style can be found in many mountain communities such as San Jose, Ribera, Villanueva, Peñasco, Mora, Trampas, Truchas and Taos. 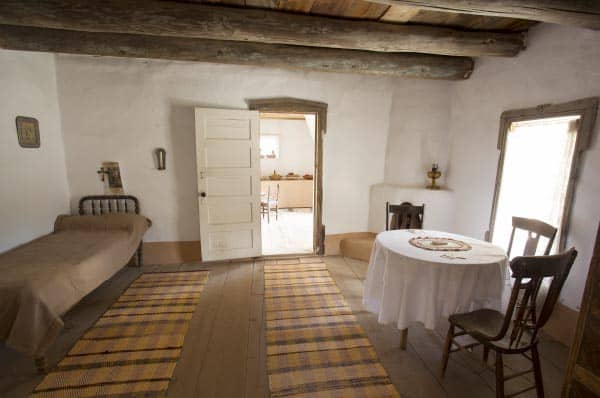 The separate parlor area is also a reflection of the furniture available to the Hispanic householder as a result of new commerce. Many of the goods found in this home are both modern store purchases and traditional homemade pieces. Such things as curtains and table covers, manufactured tables, books, kerosene lamps, and manufactured chairs are found in a room heated with the ubiquitous corner fireplace typical of the previous generations. Spindle beds, domed trunks, and a manufactured crib in the bedroom further carry this message of a mingling of the new with time-honored traditions of living. The young family living in the house has small children, a large garden to care for, many domesticated animals, and used the resources of the mountain area — especially wood — as part of their livelihood. Typical of Hispanic families of all periods, they were a part of an extended family unit living close together that included the care of and respect for their elders and as a result, the acquisition of knowledge passed down through the generations. 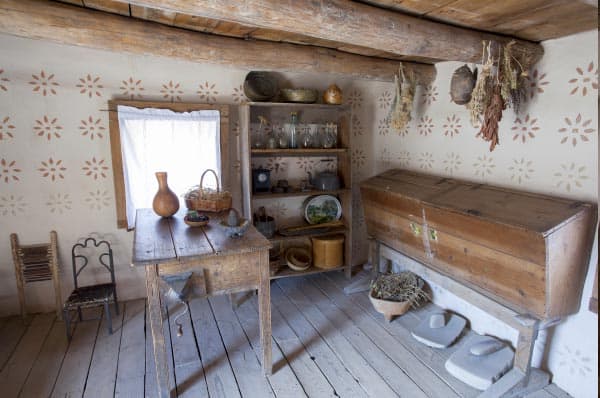 This small log home with pitched roof was the home of Isabel Sandovál Quintana well into the 20th century and was moved here in the 1970s from Truchas, New Mexico. While her specific life history is not interpreted here, we honor her as being the last person to live in this home.

Next door to the young family was the small home of grandma (abuela) living immediately adjacent to her daughter’s home. The elderly were highly honored members of the community and family. As a guardian of traditional domestic skills, grandma was an invaluable resource and here we see her maintaining a traditional way of life in the face of modern imported goods and cultural changes. Abuelita has a wealth of knowledge about the folkways of the past including the medicinal plants and practices of the mountain areas. For the benefit of her family and friends, she prepares herbal remedies (remedios) serving as a curandera (healer). Abuela most often eats with the rest of the family in the Mora House, but here she could work at her sewing, embroidery, spinning and other crafts, passing this knowledge onto her granddaughter with whom she shares this modest home.

Her furniture is sparse and simple but by the late 1800s, she has a nice bed brought in by the railroad and a cast iron heating stove. The manufactured items you see here were all newly introduced when rail transport became the method of bringing an abundance of goods to New Mexico. Note the decorative mica-stenciled (estarcído) walls. 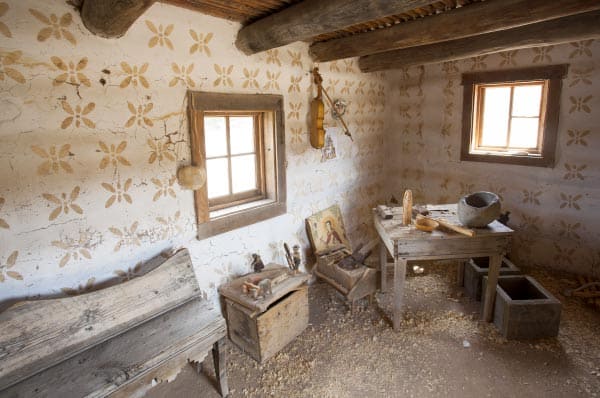 This log structure with flat roof is the Casita Primitiva. It was built in 1850 by Juan Augustin Sandoval and was moved here in the 1970s from Truchas, New Mexico.

At the Casita Primitiva the abuelo (grandfather), lives near to his son’s home. Here we see an elderly man who, like abuela, is also devoted to the traditional ways of life. As in the past, he prefers to sleep on a wool mattress on the floor rather than using a raised bedframe. He is devoted to making santos (saints), in this case bultos (wood statue of a religious figure), although sometimes he makes retablos (painting on wood of a religious figure) as well as working with straw inlay. He has a chair and table that he uses as his work area and a box filled with his tools. On the table are his grinding tools for the creation of pigments and examples of his colors, binders, and gesso. He uses religious prints as his models.

A typical small home of the region would have all the necessities and would be dry, warm, and surprisingly comfortable despite its simplicity. With packed earthen floors, mud plaster and a ceiling of vigas and latillas, this home was almost identical to homes of the valley, except it has logs rather than adobe for the walls. As practiced for centuries, the mountain folks used woolen mattresses as furniture for both sleeping and sitting. Cooking took place in the corner fireplace but abuelo most often ate with the rest of the family in the Mora House. Note the decorative stenciled (estarcído) walls. 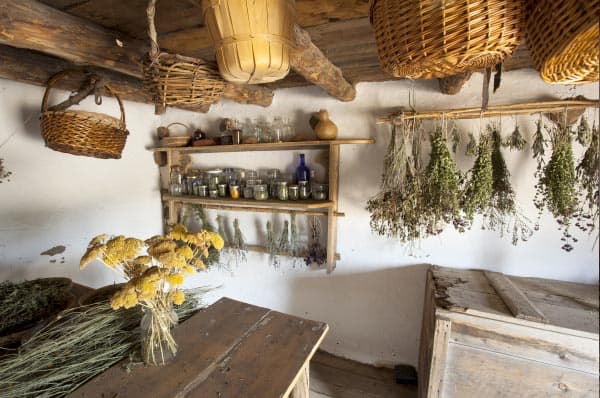 This large peaked roof building is the dispensa, used to store tools, sheep hides, and drying herbs. The log soterrano built into the hillside is the root cellar packed with jars of preserved vegetables and fruits. Some foods, such as squash, carrots, potatoes, apples, and other fruits and vegetables were covered with layers of sand and straw to preserve them. Both buildings were brought here from other locations in the sierras.