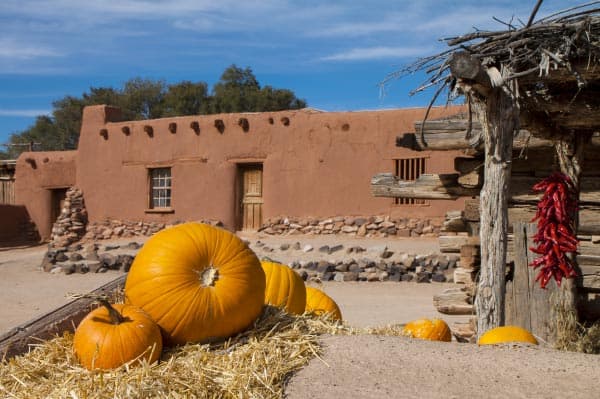 This home is believed to have been built in the early 1800s by the Baca family. Manuel Baca y Delgado, born around 1824, was from a well-to-do family and is believed to have lived in this house. He was involved in the sheep and mercantile business and was an influential figure in Santa Fe. He served as a captain in the 2nd Regiment of the New Mexico Volunteer Infantry during the Civil War, fighting at the battle of Valverde in 1862. Later in life he was referred to as Don Manuel, a testament to his standing in the community.

Today it is interpreted as a typical home in 19th century northern New Mexico during the Mexican and American Territorial periods, before the introduction of the railroad. It is characterized by its simple two-room construction with few doors or windows. This home situated in the Baca Placita illustrates the changes that occurred between what the visitor experiences in the 18th century Golondrinas Placita and this 19th century workspace and dwelling. Foremost among these changes was the opening up of the homes and work areas. The gradual lessening of hostilities with nomadic, raiding Indian groups allowed the country dweller to abandon the protective style of the earlier placita arrangement. This home in the Baca Placita shows the transition between life on the Spanish frontier and the gradual changes that occurred once the Santa Fe Trail had opened allowing new goods, ideas and styles to enter the region.

This style of living is directly transplanted from medieval Spain and persisted in other parts of the Spanish colonies. Its important to remember that the plane of existence in colonial and territorial New Mexico was much lower than it is today in that everyday life in even well-to-do homes occurred much lower to the ground. The Spanish were heavily influenced by medieval and Mozarabic customs. These customs prevailed well into the 19th century as a matter of preference and in some instances as a result of cultural isolation. Because of custom and familiarity New Mexicans typically sat, ate and slept on cushions and low stools throughout the 18thand 19th century. This Spanish custom waned in the late 19th and early 20th century because of increasing American influence and affordable mass-produced furniture. Some of these low seating areas or (estrados) were exceptionally lush with soft mattresses, pillows and textiles

Upon entering the home, important tools and supplies would be hung or stored in this convenient protected area. A large grain bin (harinero) greets the visitor. The harinero could be easily accessed by the householders as could firewood needed to fuel the activities of the kitchen. Pegs, nails and shelves would be festooned with tools, horsehair rope, bags, harnesses, animal skins — the many essential tools and supplies needed in this agricultural area.

Like the kitchen area, this sleeping and living space served many purposes. In the winter, as the light of day receded, a householder might spend a few hours working in the light of the fire on their colcha embroidery or spend a few more minutes catching up on their spinning — an easily portable task using the spindle (malacate). Also like the kitchen area, the dwellers worked and lived on a lower plane than we do today. Sleeping was on ground level or in low beds, while small, low worktables would serve multiple purposes. This room with its squared ceiling beams (vigas) and window with glass panes shows the dramatic changes that occurred when new building materials were introduced following the opening of the Santa Fe Trail by 1821. Note that swallows have built mud nests on some of the vigas.

This bedroom would have housed part of the family with others sleeping in the kitchen. The most prominent feature of the room is the Empire-style daybed, indicating influences of French Empire furniture (via Mexico City) had reached the area during the Mexican Period (1821–1846). Even so, beds, camas, were a rarity in the region until well into the 19th century since most of the sleeping was done on loosely made mattresses (colchones) that were then rolled up and placed around the room during the day and used as seating. Here we see a room in transition with both a bed and with the more common bedding. The bedding was made of animal skins and roughly woven, utilitarian textiles of the region described variously in documents as: jerga, sayal, sabanilla.

The most common furniture in both the colonial period and later was the chest (caja) Used to hold precious linens and clothing, the chest was frequently elevated off the level of the floor on legs or on a stand. The two chests in this room illustrate two different furniture styles. The painted, domed chest is in the style sometimes described in documents as a: caja de michoacán. The area of Michoacán in Mexico was famed for making beautiful and highly prized pieces of painted furniture. The larger chest dates from the mid-19th century and shows some of the influences of the Eastern American carpenter. In addition to furniture, many of the household goods were stored by being hung on the walls and ceilings of the room.

The corner fireplace heated this space and candles placed in sconces or candleholders would have provided modest light, as would the fire. Tinwork not only provided a place to hold candles but also offered a shiny, decorative, reflective surface. Documents describe entire walls in rooms of this era as being filled with mirrors and sconces.

Typical of most homes of this period, no one room served a single function and the kitchen was no exception. Cooking and food preparation were the primary activities but this room would have also been a place for congregating, eating, storage, spinning, sewing, repair of tools and harnesses, and even sleeping. This multipurpose function would have made the most of the space available. This room was constructed earlier and is different from the bedroom. The windows are fitted with wood shutters (contraventana) and bars (rejas) as opposed to double hung glass window sashes. The beams (vigas) are un-hewn and round and the latillas are a rough shake signifying a lack of milled lumber. The walls are constructed of adobe and terrones (peat from the surrounding marshland), then finished with a gypsum plaster. The built-in bench (banco) provided additional seating considering furniture could be scarce and wood was at a premium. Floors throughout the house are dirt and would have been coated with the blood from slaughtered animals taking on a hard, smooth and leather-like finish.

The hooded hearth or shepherds-style hearth is typical of Northern New Mexico homes and a direct descendent of Spanish hooded fireplaces. The hood shelf would have been used to dry vegetables and meat. While not fully smoked or utilizing the antiseptic qualities of smoke, the food hung here would have had a slightly smoky flavor. The built-in charcoal brazier would have been used throughout the seasons even though cooking was usually done outside during the summer. The square metal griddle (comal) would have been used for cooking over the brazier and the extensively used copper pots were a typical sight. Metal was a rare commodity and severely wrinkled and patched cookware was common. Other pots and bowls in use would be close at hand. The bell shaped fireplace (fogón de campana) is a unique feature not commonly found in New Mexico. While various theories exist, the shape most likely served a couple of functions including increased heat reflection, smoke ventilation for the charcoal brazier, and open hearth cooking by allowing meat to be suspended and roasted. The metal trivet provides a stable surface for pots cooking beans.

The table in the center of the room would have been used as both a workspace and occasional eating surface. Female family members would prepare the food and cook meals. The metate would have been in constant use for grinding corn and wheat if a mill were not nearby. The mortar and pestle would have been used to grind herbs. Baskets, bowls and jars would have been nearby filled with herbs, spices, tallow, vinegar and olive oil if available. The types of foods being prepared would have been similar to what the Pueblo Indians had found to be successful and commonly referred to as the “Three Sisters” consisting of maize, beans and squash. As a matter of custom the Spanish considered ground wheat to be superior to ground maize and it was planted in New Mexico with the first settlement of Don Juan de Oñate in 1598. This perfect combination of protein and starch would have been supplemented with other foods including meat and chiles. Hispanic colonists at this time would have primarily eaten lamb along with buffalo and wild game when available. Preparation would have included meat that was freshly roasted, smoked, salted or dried (carne seca).

A common sight in many households were grain bins (harinero). The bin in this room could have been used for the storage of ground or unground corn and wheat or the storage of fruits and vegetables layered with sand and straw for preservation. The built-in wall cupboard (alacena) served as a pantry keeping various perishables cool. Dishes and other vessels would have included brightly painted majolica from Mexico, Pueblo-made pottery, Chinese ceramics, dried gourds and even glass from both Spain and Mexico. Pieces made from silver and pewter could be found as well, but were much less common. The typical household would have a mix of plates and vessels of various materials as objects were broken or new ones became available. Utensils would be made of iron, silver, wood or dried gourds. The built-in shelves are characteristic and much simpler to produce than a cupboard (trastero).

Meals would typically be taken informally while seated on bancos or while sitting on a loosely stuffed mattress of roughly woven wool. Contemporary travel accounts well into the second half of the 19th century attest to this preference among all classes of New Mexicans. The practice of eating family style while seated at a table and discussing your day, so much a part of our modern lives, was not a part of life before the late 19th century in various parts of the world. As was typical of the time, meals were a task, not an event and often taken on the go. There was typically an element of segregation so men, women and children often ate separately or in stages. Meals were simply a means of stocking up on calories to get you through the day and were typically treated with little fanfare.

In addition to cooking, the women of the family or slaves would also be responsible for looking after babies and small children. The hanging crib keeps the child close to the warmth of the fire and their guardian. The bench on the right when entering the room may host a variety of activities throughout the day. Other women of the home may be carding or spinning wool with a spindle (malacate) while seated here. In the evening men may take a seat to repair a harness, or women may finish a few more stitches of their colcha before the sun goes down. The mattresses doubled over and used for seating during the day would be spread out for sleeping at night. The extra space in this room would not be wasted and any good spot for getting some sleep would be used, especially in the winter when another fireplace was available.