Following Harvest Festival (Oct. 1-2) the museum will be open M-F, 10 am – 4pm beginning Oct. 5 (the museum is closed Oct. 3-4), for self-guided site visits. There will be no docents and historic buildings will remain closed.
Please phone the tour office at (505) 471-2261 ext. 101, for details and scheduling availability.

If you’re interested in the history of Las Golondrinas as seen through the eyes of women, and are intrigued by women’s roles and lives during the 18th and 19th centuries, we now offer a “Women’s History Tour.”
Please call for details and to schedule.

Allow at least two hours to visit Las Golondrinas, as it is situated on 200 acres. Limited admission after 3pm.

Thank you for your interest and support. See you soon!

It was men who wrote much of New Mexico’s history from the 18th and 19th century. It wasn’t until the latter part of the 19th century, when the Anglo Americans started to arrive, that diaries from both men and women talk about New Mexican women. With some research, our tour guides have created a tour to tell the story of the women of New Mexico. As you are taken on a guided exploration of the historic buildings, you will learn about such topics the law, the family, the Church, everyday life, and life’s milestones in terms of the woman’s experience.

The cost for the tour is $60 for up to 10 individuals. Although not truly appropriate for younger children, teens, adult women, and adult men are all welcome.

Reservations are required. Please phone the tour office at (505) 471-2261, ext. 101 for more information and your opportunity to schedule a tour.

Teachers! Enliven your elementary class’s exploration of history at New Mexico Heritage Days! For three days in spring and fall the museum is alive with costumed volunteers who guide hands-on activities and interpret the history of Las Golondrinas and early New Mexico for school children. This immersive experience allows elementary students to take part in the same daily chores as the children of early New Mexico as they learn history in a fun and interactive way.

Each year we welcome between 10,000 and 12,000 students, teachers and chaperones to Las Golondrinas for this event. New Mexico Heritage are open to grades K through 6 only. Admission prices are $2.00 for students and $4.00 for chaperones. There is no charge for teachers. For additional details and to reserve class space for New Mexico Heritage Days please call (505) 471-2261 Ex. 101. Reservations are required.

Teachers may book individual guided tours of the museum for grades K through 12. Tours can generally be scheduled on weekdays in June & October and Monday through Sunday from June through September. For more information please contact our Education Office at (505) 471-2261 Ex. 101. For school groups the museum waives admission charges for individual students, teachers or chaperones; all school tours must be led by our museum guides.

The cost per guide is $45. If your group is larger than twenty-five participants it will require two guides at a total cost of $90, three guides at $135, etc. A visit to our museum shop can also be arranged after a tour. For additional details and to book a tour, please call (505) 471-2261 Ext. 101. School tours are by reservation only.

Josefina Montoya is a girl of heart and hope growing up in New Mexico in 1824. Ever since her Mama died, Josefina and her sisters have bravely met the challenges of the rancho without her. As they watch the new americano traders arrive from the east, they struggle to hold on to their mother’s love and the old ways she taught them. Josefina dreams of becoming a healer like her Tia Magdalena. She feels lucky to have her family and faith to guide her!

Added in 1997, Josefina was the sixth American Girl, and the third to be added after the series was launched with Kirsten, Samantha and Molly in 1986.

*American Girl is an American line of 18-inch (46 cm) dolls released in 1986 by Pleasant Company. The dolls portray eight- to eleven-year-old girls of a variety of ethnicities. They are sold with accompanying books told from the viewpoint of the girls. Originally the stories focused on various periods of American history, but were expanded in 1995 to include characters and stories from contemporary life. A variety of related clothing and accessories is also available.

Special 2 hour tours begin at 9:30 a.m. and include a guided walk through the historic buildings illustrated in the books.  Tours can be scheduled Monday-Friday in June and October and Wednesday-Sunday from June through September.  $10 per adult, $7 per child, which includes all day admission to the museum. 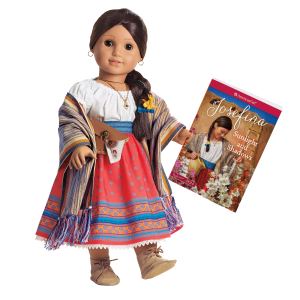 Get your Josefina™ doll and books at our Museum Store.