by Amanda Mather, Curator of Collections 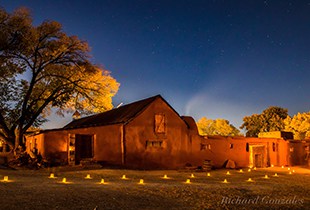 Adobe — who doesn’t love the stuff? Talk about an easy-to-find resource — it’s literally everywhere. Adobe was the first construction material used by homo sapiens — to this day, 50% of the world’s people still live in some form of mud dwelling.

When people quit chasing big animals around and started settling down they used mud to build more permanent living spaces. At the end of the Neolithic Era, around 10,000 B.C, we see the beginnings of adobe, and many millennia later we are still using it with gusto.

The earliest we see the word adobe is in the form of an Egyptian hieroglyph that translates to brick. This was then later adopted into Arabic as at-tubu, which found its way into 10th century Spanish as adobe. The English then borrowed the Spanish word in the 18th century and the rest is history.

Here in the Southwest, we have a very special relationship with adobe. Native peoples of the Americas, especially America’s more arid regions, have been using adobe to build their homes since they began agrarian communities around 900 C.E.

Unlike modern adobe, or Spanish adobe, Ancesteral Puebloan adobe buildings were made by what is called “puddling.” Instead of using molded bricks, the mud was molded by hand and then added to the soon to be building. Some of the most famous structures in the Southwest were made using this technique — for example, the buildings at Bandelier National Monument as well as the pre-contact buildings of Pecos Pueblo.

When the Spanish arrived they brought their brick making techniques with them, so the adobe of the Southwest became the brick variety. The beautiful earthy brown of an adobe wall against the staggering New Mexico blue sky is one of the most striking visuals of our region. The state of New Mexico boasts one third of all the nation’s adobe. My house is made out of adobe. And darn near all of El Rancho de las Golondrinas is made of adobe. Adobe is our jam!

During our summer and fall festivals we let kiddos make their own adobe bricks to learn how to keep the tradition of New Mexico adobe alive. Come join us this summer and watch your kiddos try their hand at making adobe bricks — they will love it!